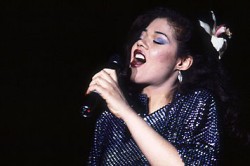 Angie’s got a lot of heartbreak in her songs. “Song For a Rainy Day”, “Let Me Be The One”, and “Accept Me” are all about rejection and lost love. But those songs, while beautiful in their own way, can’t hold a candle to “I Try”.  Recorded in 1979, “I Try” is the gold standard for R&B break-up songs. It’s is her signature song, from her best album (Angel of the Night). It’s her magnum opus.

The guys from the “Kiss of Life” state it best:

There was something about that song that captured the whole raw outpouring of unrequited love feelings, ’cause this was not only the first real love, this was also the first real heartbreak; the first time not understanding how giving your all, for some stupid, unfathomable reason, could not be enough. Angela said it in that song. Angela sang all that bitter teenage angst like as if she had a copyright on it.

And to think that she wrote it at age 17… below is an excerpt from an interview that “Angie” Bofill gave in 2010.

Darnell Meyers-Johnson: And then you followed that up about a year later with the second one, “Angel of the Night”—which everybody knows that song. But also, on that album, it featured a song that would kind of remain one of your signature songs for the duration of your career. So what can you tell me about the song “I Try”?

Angela Bofill: Oh, I wrote it at seventeen years old.

DMJ: [Laughs] So you were breaking up with someone at that time?

AB: Turned out, play on the song—drummer! [Laughs]

DMJ: Oh, he was the drummer—that was the guy?

DMJ: Did he know the song was about him?

AB: Yeah, of course. Now—a famous drummer, now [laughs]. Because of me.

Who would have thought that 6 minutes of the most gut-wrenching soul could come out of a teenage break-up. Wow.