Thank you for your love of music.

[Note: Why am I thanking Questlove (drummer with the Roots and overall musical Renaissance man)? And what does he have to do with Ask Rufus? Give me a moment to explain.]

In 2006, I came across your rare groves compilation Babies Makin’ Babies1. I appreciate your desire to share lesser-known musical nuggets with the masses. All of the tracks are great; however, two in particular really caught my attention: Bill Withers’ “Can We Pretend” and Rufus’ “Magic In Your Eyes”. 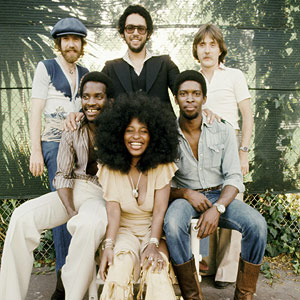 As you know, Rufus (the 70’s R&B and funk group fronted by Chaka Khan) is best known for funk jams like “Tell me Something Good” and “Ain’t Nobody”. Even though “Sweet Thing” and the underrated “Circles”2 stayed in heavy rotation on the iPod, I couldn’t claim that I loved the band.

“Magic In Your Eyes” changed my entire perception of the group.

I was wowed by the mastery of control that the band showed on the track. Rufus could have overpowered the song with their standard sound; instead they showed remarkable restraint in their delivery. The bongo drums and backing strings add depth to the instrumentals, elegantly framing Chaka’s voice and lyrics. And speaking of the lyrics – they are some of the best I’ve ever heard on a ballad.

I learned that “Magic In Your Eyes” came from the 1977 Ask Rufus album. I went in search of the LP, hoping for more songs like “Magic…”. I wasn’t disappointed.
While not a traditional concept album, Rufus managed to craft an album experience that effortlessly flows from song to song. They kick things off with the funky “At Midnight (My Love Will Lift You Up)”, which mellows out at the 2:20 minute mark before spilling into “Close The Door”. The groove stays constant through the rest of the album – on instrumentals like “Slow Screw Against The Wall”, torch songs (“Everlasting Love”) or the before mentioned “Magic In Your Eyes” (see below).

So why is this one of my favorite album? Well, by 2006, I was pretty disillusioned with soul music. Baring a few examples, the stuff on the radio was a pu-pu platter of auto tune, generic beats, and obnoxious hype men. I enjoyed the old stuff, but I thought that I had heard all the great albums out there. Ask Rufus (and more specifically, Babies Makin’ Babies) made me understand that there was a lot more to discover.
So I started my blog; both to share music, and to discover new music… and it’s been a fantastic ride.

Rufus – Magic In Your Eyes