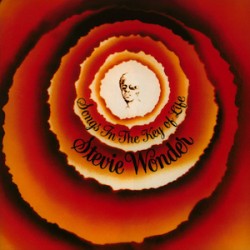 Last week, I ported over a 4-part series about Steve Wonder’s from my old blog. The posts were about his greatest recording period – the late 60’s and his 1970- 76 “Classic Period”1:

As I re-read the posts, I realized two things:

Of all the albums, Songs in the Key of Life I’m most happy about. Just the time, being alive then. To be a father and then… letting go and letting God give me the energy and strength I needed.

I always liked Stevie’s stuff, but didn’t really get into him until high school. It was his either my junior or senior year, and my twin brother was trying to put together a mix-tape for a date that he planned for the weekend. He knew that the girl liked Stevie Wonder, so a quick trip to the mall netted us Stevie Wonder’s Original Musiquarium I2.We played the first few tracks… they were good, but nothing spectacular.

Then I heard “Superwoman (Where Were You When I Needed You)”, and I was hooked.

I couldn’t get enough of Steve’s music. I got my hands on a second compilation (Song Review: A Greatest Hits Collection) then, in college, purchased all of his “Classic Period” recordings (and the “just missed the Classic Period” album, Hotter Than July).

Each album has a special place in my heart. Music of My Mind has “Superwoman…”. Talking Book’s “You’ve Got It Bad Girl” sound like you’re floating on clouds3. “Golden Lady”, off Innervisions, remains one of the prettiest love songs ever recorded. Luther’s versions of “Creepin'”, while awesome, pales in comparison to Steve’s recording on Fulfillingness’ First Finale. Hotter than July has both a sweet album cover and  Stevie’s second best break-up song (“Rocket Love”).

Ultimately, while I love each of those albums, my favorite is Songs In The Key Of Life… because I spent every Wednesday night during my sophomore year of college listening to this album (along with Miles Davis’ Kind of Blue). I was a mechanical engineering undegrad, and we had a fluids lab every Thursday. Usually, the night before, I would be in the computer lab4 writing out the lab paper (usually with a Dr. Pepper, sour straws, and one of my best buds in college, Mike). It was the best of times, it was the worst of times. I lived in a crappy apartment 5. My car never seemed to work. Dating? Forget it. But, I had my friends, and I had Stevie.

And that made it ok.

I love a lot of the tracks on Songs; it’s hard to choose a favorite. Since it’s a double album, I’ll go with one from each disc. “Summer Soft” plays on the summer break-up themes from “Never Dreamed You’d Leave In Summer” and the now-thrice mentioned “Superwoman”. “Another Star”, from the second disc, is an all-out jam, with a solo from Bobbi Humphrey and guitar from George Benson.