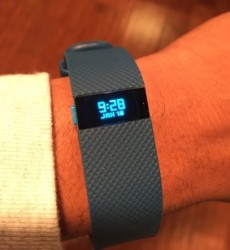 My company did us a solid last week and gave everyone a $150 credit to purchase a fitness tracker.1 After looking at a few options, I went with the Fitbit Charge HR, primarily because of the positive review on CNET2.

There are really good reviews out there, where people compare multiple trackers and rank them. I can’t provide a side-by-side analysis of trackers, but I can share what I like, and dislike, about my Fitbit.

with a personal trainer for the last two years3; he does a great job of putting me through the paces and getting my heart rate up. Last week, we did a series of full body exercises, starting with plank rows, weighted lunges, burpees, and a number of balancing exercises on a Bosu ball. In my opinion, the Fitbit did a great job logging the intensity of the session (see the picture to the left). The middle of our session was the most intense – which matched the peak and cardio indicators. At the end, we finished with Romanian deadlifts, pistol squats and shoulder presses – performed at a slower pace. Again, this matches what was captured by the Fitbit.

I used it on two other occasions where I’ve primarily done weightlifting – one session pretty intense (building endurance) the other not-so-intense (building strength). On both occasions, the Fitbit seemed to capture the proper “intensity” – based on my steps (or lack of steps) and my heart rate.

My problem with Yoga is that the level of intensity changes by week – some sessions are about balance and space, other focus on core and strength4. So, I wasn’t sure what the Fitbit would tell me.

My other concern was that the Fitbit would interfere with some of my poses, but no problem there. The Fitbit stayed in place without any readjustments needed.

So overall, I really like this activity tracker. I can’t compare it to a Garmin or Jawbone… but I can say that it works well for what I need it to do.